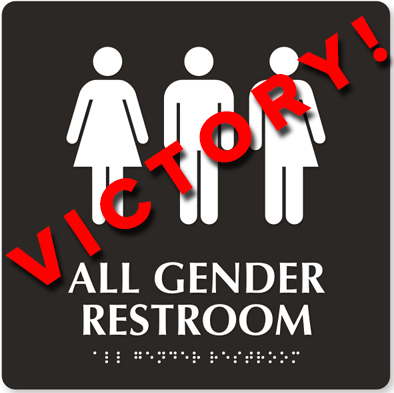 Gender Justice League congratulates the Seattle City Council for unanimously passing legislation transmitted to the council by Seattle Mayor Ed Murray. Seattle joins West Hollywood, California and Washington DC in requiring all single stall restrooms to be labeled as gender neutral. This legislation specifically will increase access to safe restrooms and public accomodations for transgender and gender non-conforming residents and visitors in Seattle. The legislation is part of a set of comprehensive recommendations made by the Mayor’s Task Force on LGBTQIA Hate Crimes and the Mayor’s Action Plan. The policy was also proposed by both the city’s LGBTQ Commission and former city council member Sally Clark, we are honored to support their work!

Mayor Murray’s office said today: “This legislation will provide for all-gender restroom facilities and amend the Seattle Municipal Code so that single-occupant restrooms will no longer be restricted to a specific sex or gender identity. Single-occupant restrooms in City facilities and all public accommodations (including restaurants, coffee shops, stores, etc.) must have signage that makes it clear that they are not gender exclusive and allow use by any person regardless of sex or gender identity, rather than just “men” or “women.” The Seattle Office of Civil Rights (SOCR) will be responsible for enforcing these changes.”  You can read his office’s full comments on their website.

Gender Justice League joined the work of the Seattle LGBTQ Commission over the last 3 years in supporting this legislation – you can read our letter of support to the council committee when the legislation was first introduced this spring.  Many LGBTQ organizations joined in the call for this legislation, specifically citing the horrifying statistic that 53% of transgender and gender non-conforming people have faced verbal harassment or disrespect in places of public accommodations, and 8% had reported being physically attacked or assaulted in places of public accommodation.

Gender Justice League has recently partnered with Pike Place Market to change the labeling of their bathrooms (the oldest public bathrooms on the west coast), as well as with local artists and designers to create more gender neutral rest room signage to assist places of public accommodation in following this ordinance.  Gender Justice League looks forward to working with the Seattle Office of Civil Rights and the Seattle LGBTQ Commission in providing guidance and assistance to local area businesses in following these new guidelines.