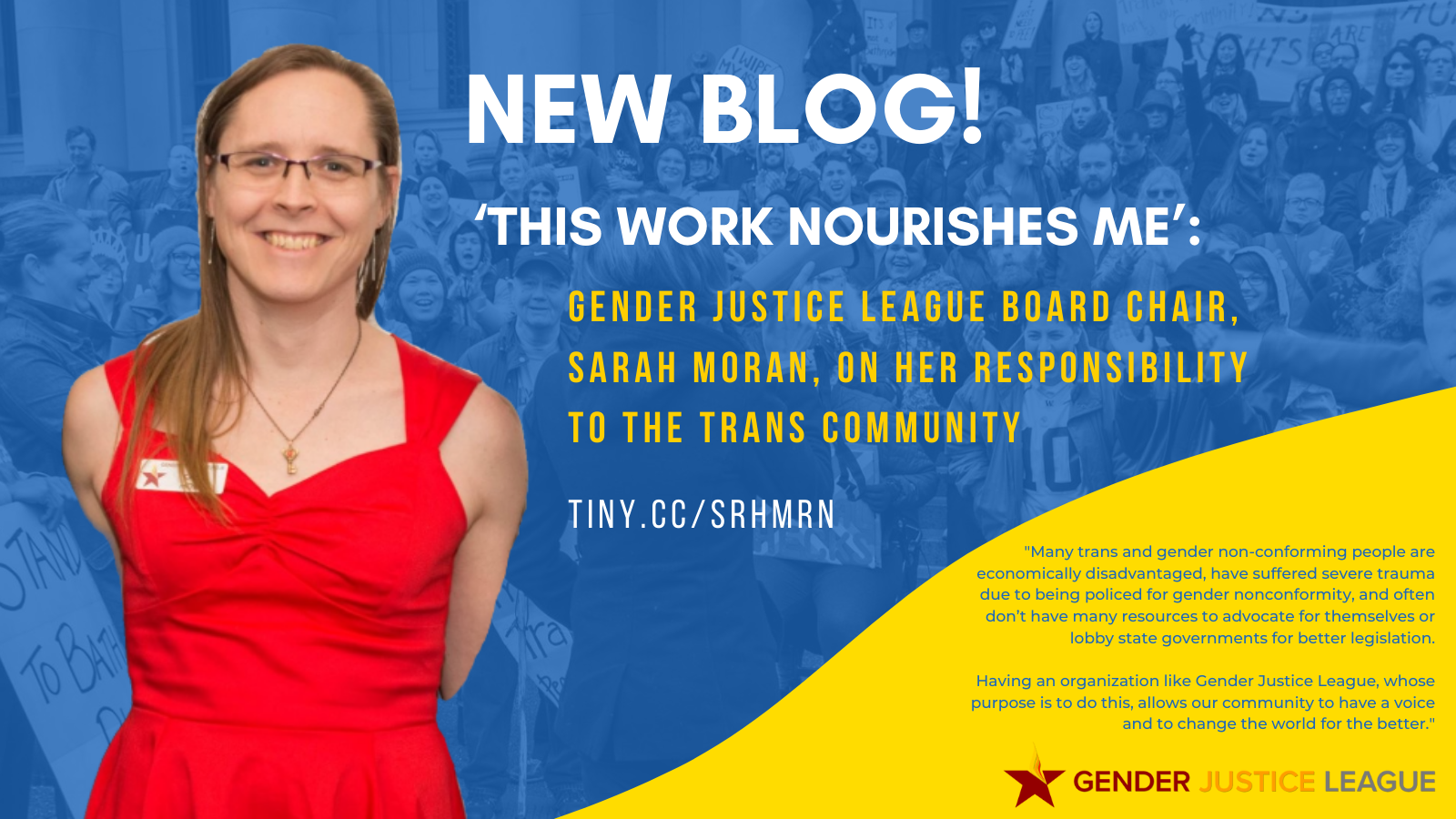 What is your current role with GJL? When did you first become involved, and how did that evolve?

I’d been adjacent to Gender Justice League for many years, since early in my transition. GJL was started by people I was friends with from a trans support group, so I was aware of it from its early stages, but I didn’t get properly involved until a few years later, after I was more secure in myself. I became a regular donor to GJL in 2016, shortly after the election of Donald Trump, when I realized I needed to be more active in creating the kind of world in which trans people could thrive—because there were people getting more and more power who wanted precisely the opposite. I was recruited to the board a couple of years later, and when our previous chair, Sophia Lee, decided to step down, she asked if I wanted to take up the role of board chair. I knew it would be a challenge, but I wanted to stretch myself and continue working on behalf of the community.

My role as board chair includes overseeing board meetings and driving the organization’s direction. GJL is at a turning point in its lifetime as a social justice organization, and I see it as my responsibility to help define the direction the organization will take in the next 3-5 years.

What community needs do GJL meet?

One of the things Gender Justice League does is fight back against legislation which seeks to curtail the rights of trans and gender non-conforming people (e.g. the infamous bathroom bills). We mount defenses, lobby legislators to not pass such bills, and combat signature-gathering campaigns which spread misinformation about our community and who we are. We’ve contributed strongly to efforts to prevent transphobic legislation from taking hold in WA state—bathroom bills, sports bills—we’ve stopped those from becoming a reality. Recognizing that many people in our community are involved in sex work, we also advocate specifically for better sex work legislation and decriminialzation. We fight to ensure sex workers are protected, and not demonized, abused, or taken advantage of.

Gender Justice League’s advocacy represents voices not well represented in the halls of power. Many trans and gender non-conforming people are economically disadvantaged, have suffered severe trauma due to being policed for gender nonconformity, and often don’t have many resources to advocate for themselves or lobby state governments for better legislation. Having an organization like Gender Justice League, whose purpose is to do this, allows our community to have a voice and to change the world for the better.

GJL also offers direct assistance to individuals in the community in need of emergency housing or financial support. Many trans and gender non-conforming people are economically disadvantaged and suffer from housing and food scarcity. This type of insecurity prevents people from actualizing themselves. We want to provide people this security.

GJL also hosts a large community gathering event—Trans Pride—every year, an essential space for finding and building community, where people can branch out to meet and understand more subsets of the trans and gender diverse community.

How has GJL impacted your personal life?

It can feel overwhelming sometimes to be confronted with everything that is wrong and unjust in the world. It feels like you would have to boil the ocean in order to fix it all, and that it just can’t be done. Working with GJL allows me to have some agency and to advocate for my community, and to make improvements in the world for not just me, but for everyone. That is nourishing to me. It is healing. It makes me feel better. It makes me feel like I can be effective—and that I may not have to boil the ocean—but I can make a difference somewhere. When enough of us work on making a difference, the difference can be made.

What has kept you coming back to this work?

Obviously, I have a personal interest in advancing the rights of the trans community, but one of the things that keeps me coming back is a desire to use my privilege for good. I have a lot of privilege—I don’t have cisgender  or male privilege, but I do have white privilege and economic privilege. I have been lucky enough to be gainfully employed and financially secure, and I need to use that for something that will help people who aren’t as lucky. Also, not everyone has the emotional bandwidth to advocate for themselves—so those of us that do have that bandwidth have to step up. Especially after the 2016 election, I realized there was a lot more that I had to do. I knew there was a lot of danger coming toward our community in the coming years. I realized I needed to apply my privilege in order to help my community. I feel a sense of agency when I’m able to take actions that do good in the world, as opposed to reading the news and feeling despair. If I can find a way to contribute—even if it’s small—if it’s within my means and I can make a difference, that’s what keeps me going.

How does a donation to GJL support the movement?

Donations directly fund our budget for GJL’s policy advocacy work, our Safehouse program, and Trans Pride. For our Safehouse program to house someone for a few days, we need to pay rent, whether the housing is provided by us directly or via a third party. Our staff is constantly keeping up with everything going on in Olympia and the efforts by our political opponents to introduce legislation targeting our community. And though Trans Pride has been muted as an event for the past couple of years due to COVID, it is historically an expensive event to produce, but it is a fixture for the community that is important to provide. I look forward to when we can do it safely in person again.

Like anything else in this capitalist world, money makes the world go ‘round. We need to be able to pay our staff to do this work: paying staff means they are able to devote themselves full-time to pushing for better policies, and supporting trans and gender diverse people in our community. If we were all volunteer-run, I think we would be a lot less effective. Donations given to GJL go directly towards paying our staff livable wages, giving them access to healthcare and stability, so they can use their time to advocate on behalf of our community.

GJL helps real people. Contributing to GJL keeps us going and allows us to continue doing the grunt work to ensure transphobic bills don’t pass, and that a trans person doesn’t have to sleep outside if they lose their housing. A donation goes toward work that actually helps people. It’s an incredible value for your dollar.

Within the trans community, the demographic that is the most at-risk for poverty and violence is people of color. The majority of trans people who are victims of violence, whom we memorialize annually on Trans Day of Remembrance, are trans women of color. The intersection here can’t be ignored. So much of that violence is rooted in both transphobia and racism/white supremacy. We can’t just say ‘we only work on trans justice, not racial justice.’ Trans justice work necessarily includes racial justice work.

White trans people and trans people of color have some of the same needs, but some of our needs are very different. In order to be effective as a leader in the community, I have to take it upon myself to understand the needs of communities of color—to seek out Black, Indigenous, and other POC voices and make sure they are part of strategizing our work. As a board chair, it’s important for me to make sure that I humble myself and recognize where the gaps in my understanding are and work to close those gaps. It is important to me to reach out to and build connections with organizations that are Black and POC-led, to ensure we are working with them, not just working next to them, or working against them without realizing it.

Anything else you’d like to add? Any parting words?

Social justice work is challenging, and I’m still a beginner as far as I’m concerned—I always have a lot to learn and a lot of room for growth. But if the past five years have taught me anything, it’s that no societal progress can be taken for granted. The rapid rise of right-wing nationalism in the U.S. shows us that there will always be people pushing to take away what we as marginalized communities have earned. It’s not enough to be simply “not racist” or “cool with trans people.” We must challenge ourselves to be actively anti-racist and anti-fascist, and to push back against transphobia and homophobia, if we want to truly build a world in which those ideologies cannot take root.