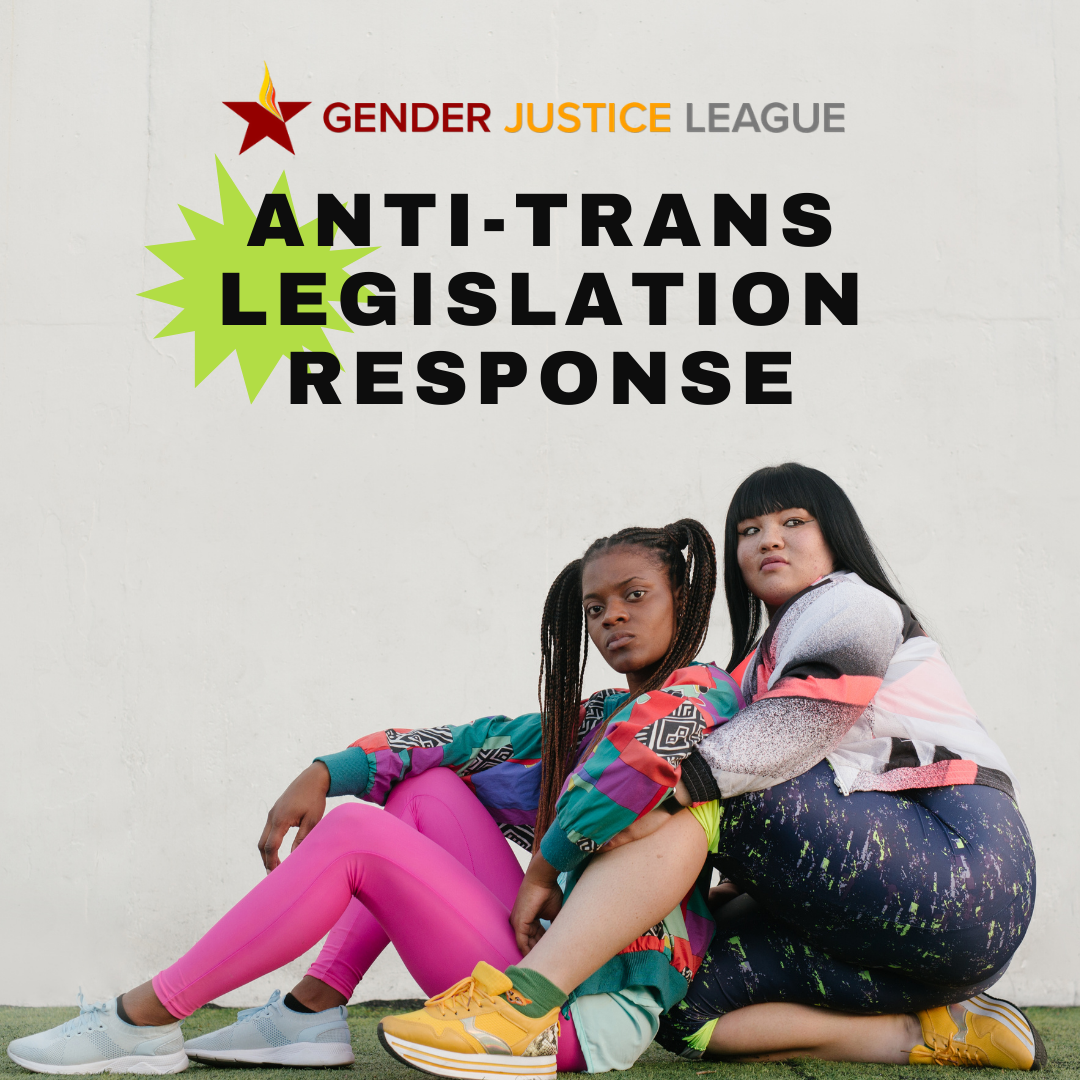 Gender Justice League is a collective that creates multicultural programs for transgender, gender diverse, and racialized communities, and those who live in the intersection of all lived realities. We provide:

While there is much work to be done in our home state, Gender Justice League’s advocacy team recognizes that WA State’s history of LGBTQ+ solidarity gives us a responsibility to address national disparities impacting transgender and gender diverse populations across the country.

In this policy statement, we address the strategic and overwhelming amount of anti-trans legislation that has occurred across over at least 33 states, in the form of over 100 anti-trans bills.

The Human Rights Campaign has named the year 2021 as a record year for anti-trans legislation. Gender Justice League will show how institutional and systemic violence against LGBTQ+ communities work in conjunction and are intentional. We’ll address these connections, document the history of cissexist and heterosexist white supremacy that denies gender diverse communities access to things that help us lead full and free lives, including the right to gender-affirming healthcare, participation in sports, and the importance of education when engaging with political legislation.

What is Anti-Trans Legislation?

Anti-trans legislation is a political strategy to target trans and gender diverse people for discriminatory and life-ending motives. In the past, we have seen such policies create barriers to and criminalize gender-affirming medical care, the use of public restrooms, restriction of participation in sports, and block our ability to update identification documents that represent our name and gender. These tactics used by right-leaning politicians are fear-based, as seen with previous bathroom legislations in 2016 portraying trans women as “sexual predators” and criminals.  Partnering with other organizers statewide, Gender Justice League effectively organized against these bills and garnered significant support by working with lawmakers, holding rallies, and talking to the media, and training others to do so—eventually seeing major financial backing from local corporations, which used their clout to support the defeat of the initiatives.

Since bathroom bills have largely failed, we are now experiencing a shift towards attacking some of our most vulnerable community members: trans youth.

Why Should Anti-Trans Legislation Be Stopped?

Gender Justice League’s advocacy team recognizes that the current 2021 wave of anti-trans legislation will increase the systemic oppression against trans people and escalate socio-political violence towards gender-diverse communities. Some of the reasons we see stopping this legislation as necessary include:

How Can We Support Trans Youth?

1. Educate yourself on trans experiences and histories, and share what you learn with others in your circles:

2. Stay up to date and advocate against anti-trans legislation: