This weekend the United States Senate voted to confirm Brett Kavanaugh to the Supreme Court in the most problematic and flawed confirmation process in recent history. Never have we had a Supreme Court nominee who has demonstrated such partisanship and lack of objectivity.

We are proud to announce that Gender Justice League is standing by our allies at Yes On 1631 to fight for Climate Justice and support Initiative 1631.

Remember, today August 7th is the deadline to return your primary ballots in WA State!

Back in June, local cupcake & ice cream purveyor Cupcake Royale pledged to donate proceeds from their Pride-Month rainbow cupcakes to GJL. They even allowed us to design some of the cupcake tops! Selections included our logos, plus the trans pride flag design.

Today, they handed us a big check...literally! We received a whopping $2800 from their June promotion.

A big thank you to our friends at Cupcake Royale!

Click on the link (GJL YouTube) to find out what happened next, when we tried to deposit our check at the bank! 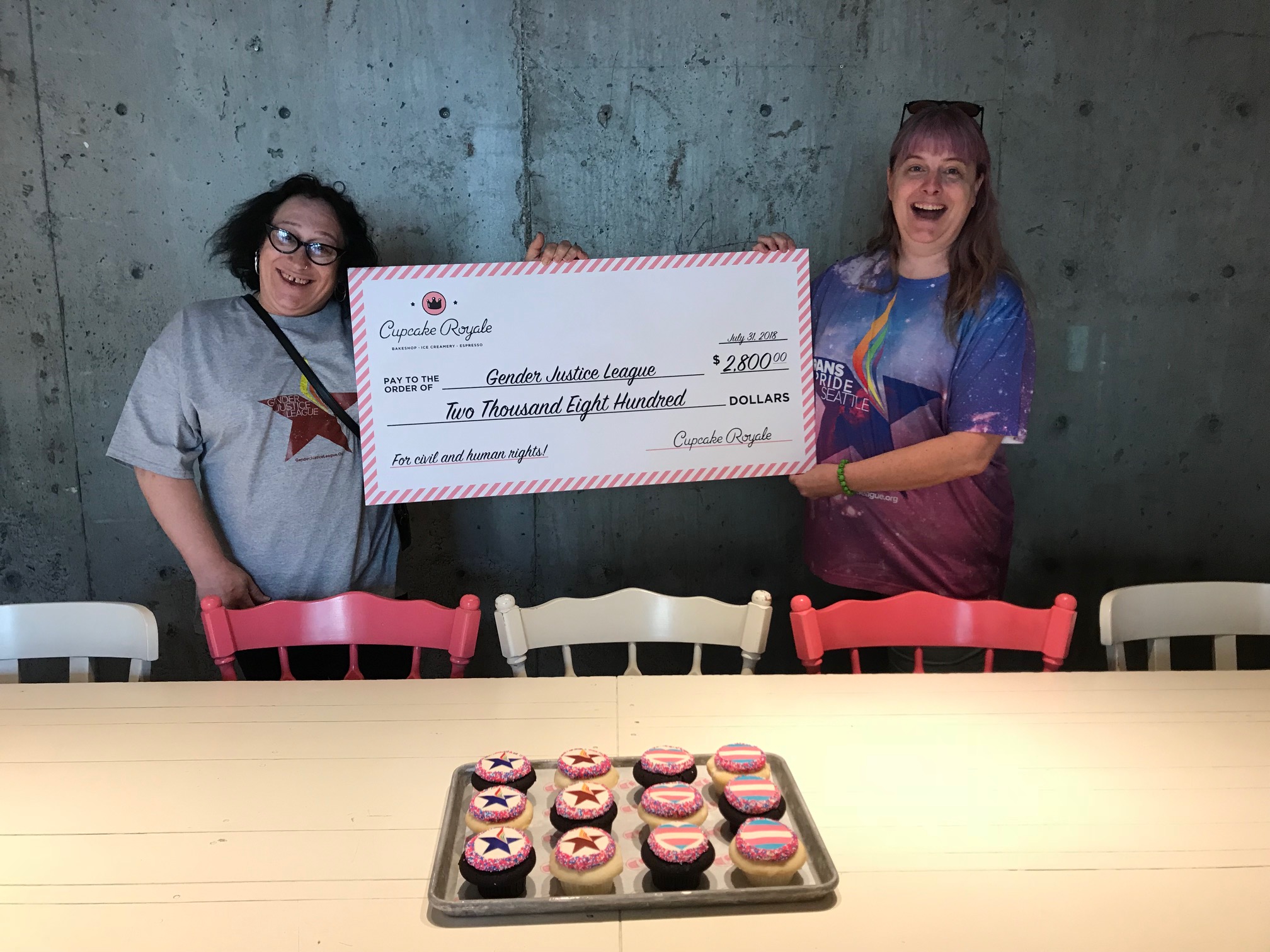 We are excited to announce that we are launching our new website, www.genderjusticeleague.org.

Our new website was redesigned to streamline content and materials to help bring transgender rights to all.

Read about our organization on our about page, for resources check out our resources page and keep up with all of our activities on our updates page.

And a special thank you to Tectnonica for helping us bring this new tool in fighting for transgender civil rights.

Last night, President Trump nominated Judge Brett Kavanaugh to the Supreme Court. If Kavanaugh is appointed, it would pose a devastating blow to civil rights, transgender people, and countless marginalized communities in our country.

“Gender Justice League condemns Kavanaugh as President Trump’s choice for the Supreme Court.” said Sophia Lee, Board Chair of Gender Justice League. “With Kavanaugh, we would be seeing attacks against people of color, LGBTQ people, immigrants and many others for years if not decades to come. We cannot allow a Supreme Court Justice who will allow discrimination against our most marginalized communities”

“Kavanaugh would represent a huge shift of the Supreme Court away from the will of the people.” said Elayne Wylie, Deputy Director of Gender Justice League. “The Trump Administration has time and time again expressed their views against women, LGBTQ people, immigrants, and so many other people. We believe that this nomination is another attack on marginalized communities. The Supreme Court must not become a puppet of the Trump Administration that would erode away at the freedoms required for people to live their lives.”

“This nomination follows a trend of the Trump administration trying to put power in the hands of radical conservatives.” said Maayan Kline, Board Treasurer of Gender Justice League. “Now more than ever we need to make it clear to our Senators that we will not stand for having our rights threatened.”

We urge for the community to contact their Senators and let them know that our communities oppose this nomination.

Please donate to help support Gender Justice League as we face a never-ending onslaught of discrimination and harmful decisions from the current Federal Administration.