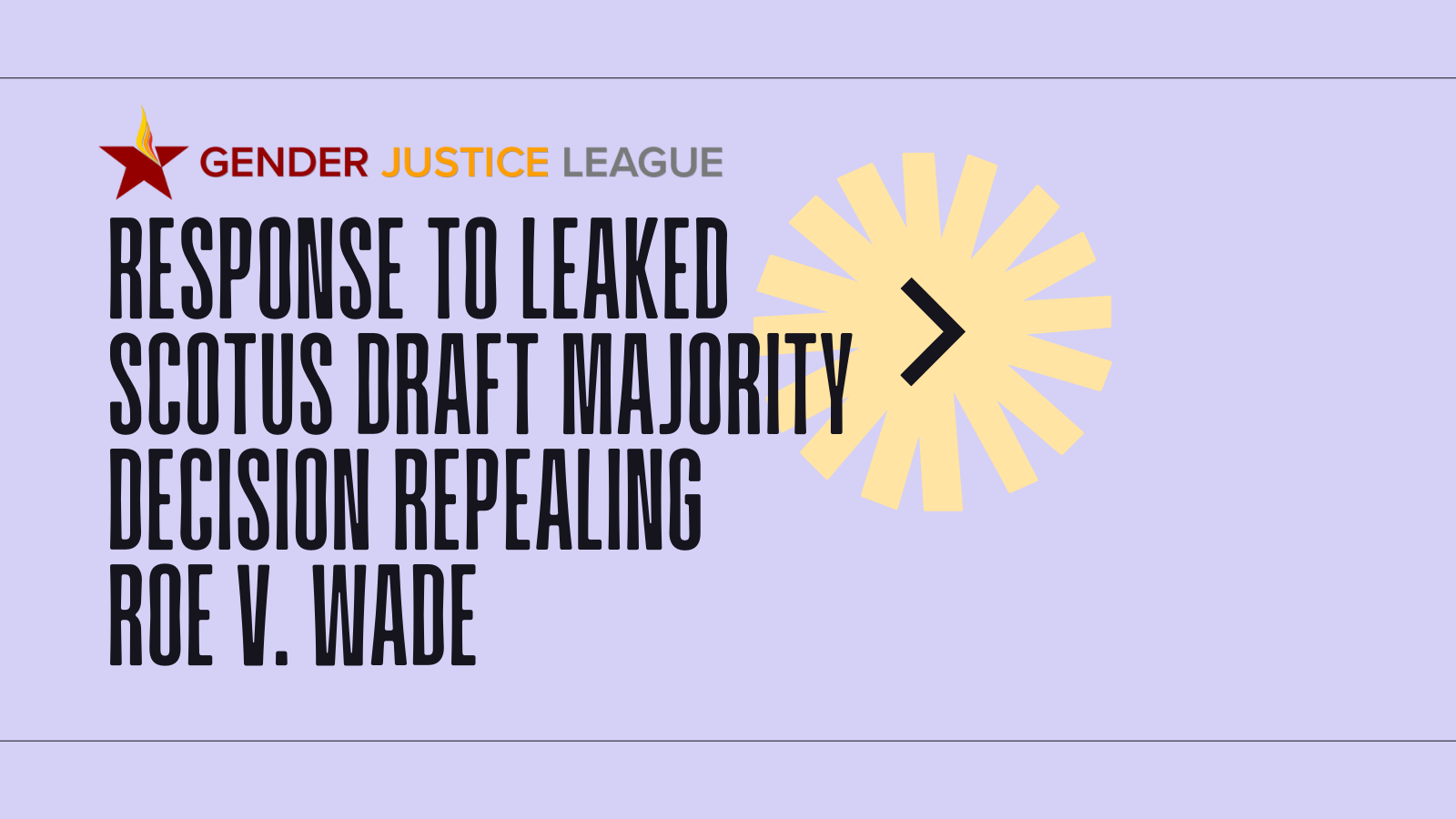 Gender Justice League joins with our colleagues and community in expressing deep concern and outrage over the leaked draft of a Majority Decision repealing Roe v. Wade and overturning more than 50 years of legal precedent in the United States. A draft is a proposal by one Justice, that is circulated amongst the justices. The draft outlines an initial interpretation of the law, by a single judge, and it is not a legally binding decision yet. Justices can ask that the draft be altered, or can choose not to endorse the final opinion or completely change their vote ‌until the final day of the session on June 30th, 2022.

As transgender and gender diverse people, we know all too well the terror that can be unleashed when legislation, litigation, and ballot measures are used to attack the extremely private healthcare decisions made between doctors and patients. The radical attack on the 14th amendment that is outlined in the draft decision would unwind decades of precedent—not only on Roe v. Wade—but on dozens of other landmark rules establishing the fundamental right to privacy.

Gender Justice League is deeply concerned about the implications on key rulings such as: Lawrence v. Texas (2003) outlawing sodomy laws, Griswald v. Connecticut (1965) outlawing restrictions on contraception, Loving v. Virginia (1968) outlawing laws against interracial marriages, Stanley v. Georgia (1969) preventing laws that ban pornography, Obergerfeld v. Hodges (2015) guaranteeing same-gender marriages, Meyer v. Nebraska (1923) ensuring parents can seek instruction in languages other than English, and Skinner v. Oklahoma (1942) banning forced sterilization by the state. All of these decisions relied on an interpretation of the 14th amendment that guarantees freedoms from state control over a person’s private, deeply personal, and moral decisions. Eroding Roe v. Wade will call into question each of these rulings—and re-open our nation to decades of litigation, confusion, and political turmoil.

The immediate implications of a repeal of Roe v. Wade would have dire impacts on all pregnant people across the country—including in Washington State. Neighboring states like Idaho have laws that will immediately outlaw abortion if Roe v. Wade is repealed —placing an extreme burden both on pregnant people in those states, but also on abortion providers and abortion access funds in Washington State.

We also know that in the current anti-trans backlash, radical revisionist legislatures will attempt to pass civil bounty hunter and criminal penalty laws against providers of transition-related healthcare for transgender youth–and possibly seek to restrict or outlaw all gender-affirming healthcare for both youth and adults. A repeal of the 14th amendment protections outlined in Roe v. Wade would make it “a state-by-state” decision about such criminal or civil penalties for this type of care.

We are calling on Washington State Governor Jay Inslee and the Democratic Majorities in the Washington State House and Senate to immediately call a special legislative session and to pass Safe Harbor & Sanctuary laws protecting any person who flees to the State of Washington to avoid prosecutions or civil penalties. We support laws that protect people in Washington State from facing extradition to another state to face prosecution for performing, assisting access to, or receiving an abortion; AND for providing, supporting access to, or receiving gender-affirming healthcare.

No tax dollars in Washington State should go to supporting these unconscionable and immoral attacks on the bodily autonomy of people in the United States by radicals in legislatures across the country seeking to force their dystopian world view onto others.

Bodily autonomy and freedom from state-mandated pregnancy are fundamental human rights that are conferred not only in the U.S. Constitution, but by dozens of international treaties and human rights conventions. We take a global view of what the radical action proposed by the court will result in—a radical limitation on the ability of ALL people to ensure the freedoms and liberties reserved by the people, free from state interference in private moral matters.