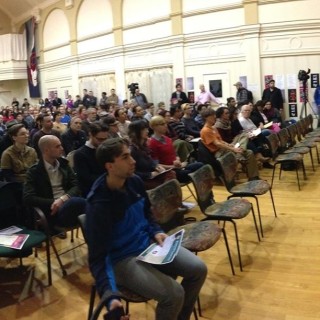 Gender Justice League was honored to join with Councilmember Kshama Sawant’s office and 10 other LGBTQ and allied community organizations to hold a community forum on hate violence in Capitol Hill.  Since the start of 2015 – 8 trans women, 7 of them trans women of color have been murdered in the United States.  2014 saw a rash of hate violence on capitol hill including an attempted arson at Neighbors night club and the murder of two young black men in Leschi – though the crime started on Capitol Hill.  Numerous GJL members have expressed an ongoing fear of violence and lack of safety on the hill and a desire to create community based solutions.  We heard loud and clear from the community on Tuesday night – Hate Violence is a significant problem on the hill.  Community members called for concrete actions to addressing income inequality, the housing affordability crisis, LGBTQ youth homelessness, and to restore funding for mental health and human services.  Many community members shared their horrifying experiences of violence on the hill, and we were exceptionally thankful for their courage to educate.  Calls for more housing for homeless LGBTQ youth resonated loudly in the room.

For our next steps – Gender Justice League will work with our community partners to bring together a Task Force to more closely coordinate our response to victims, clarify what community based solutions we believe will bring about progress in reducing hate violence on the hill, and make recommendations to public officials about how the city, county, and state can better respond to hate violence.   What is clear is that Tuesday night’s forum was the first step in an ongoing conversation about ways to address safety, livability, and hate violence in Capitol Hill.  We look forward to working with community members, elected officials, and organizations to making tangible progress in reducing hate violence on the hill.

-Gender Justice League
You can read coverage of the event in The Stranger, Capitol Hill Blog, and watch news coverage on KIRO 7, King 5, and Q13.